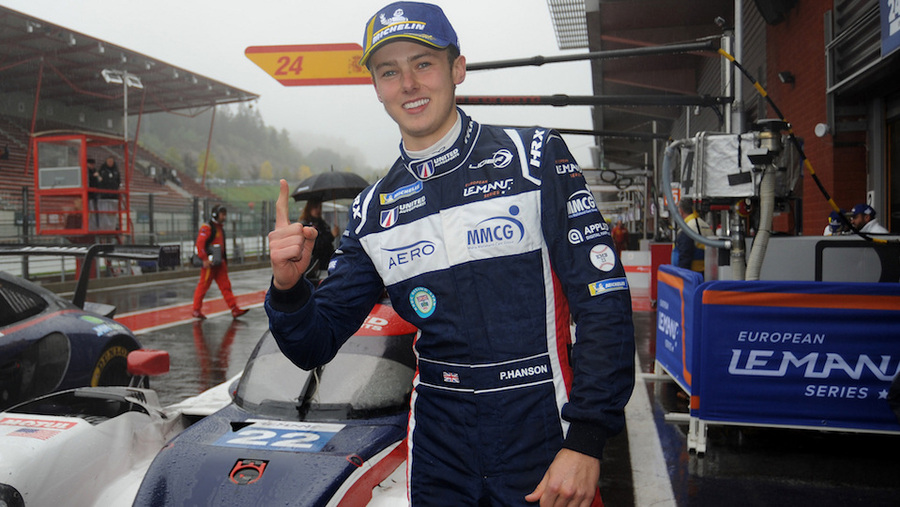 “I’m really happy to have won my first ELMS race and first international race! Although it wasn’t the most conventional of races, as due to horrendous weather it was shorter than the intended 4 hour length, nonetheless it was a good race and the whole weekend was positive.

Qualifying went in our direction. From the outset we were quick and had a really good set-up on the car, so then it was just a matter of fine-tuning. Then the weather threw a spanner in the mix and luckily we were able to play out our strategy in our favour, and bank on the race director seeing the track conditions being too risky to continue the race. We were also able to look at the radar and our strategists and engineers were able to read it to our advantage, so it was really good stuff - I’m very happy.

It’s strange not seeing a chequered flag but seeing a red flag instead. There’s a joy in it but it’s a bit different to what you’re used to. Fortunately in our case it wasn’t because of some serious injury or crash, it was because of the potential for that to happen with the weather conditions. Regardless, being able to know that we did it, we finally had the luck that we’ve been missing all year was fantastic!

We’ve had bad luck and I think it’s kind of played back in our hands with a stroke of good fortune in this round - giving us the red flag at the opportune moment when we were leading the race. It evens out some of the bad luck we’ve had throughout the year. It’s a little bit disappointing that it wasn’t a race we won on outright performance, which shows a more impressive status against the other teams in the paddock, but a win is a win at the end of the day. People saw that we did a good job in qually and have been quick throughout, and I think people know we’ve had bad luck throughout the year, which isn’t down to any aspects of the team or us, I think it’s just been misfortune in the race. So it is a bit disappointing that the victory came late in the season and in the shortest race but that’s how it is sometimes.

I took things pretty steady at the start of the race because of the dire conditions. On reflection maybe I was too conservative as I did lose a few places unfortunately but better that than risking chucking it off the track. Perhaps I could have been a bit more switched on with some of the things I could have done to help improve my stint inside the car, things that make the drivability easier . . . something experience will steer me towards next time. The team and drivers always discuss all the different conditions. Before the start of the race we said if the weather continued as it was doing then, we might pit straight for Filipe, even earlier than we actually did, to try to maximise his time in case they shortened the race, to get his driver time out at the maximum then let me fill up the rest, rather than the other way around.

This was more of an aggressive strategy but we were able to do that as we’re not in a championship position so still able to gamble on each race which played in our favour this time but hasn’t in a few previous races when we’ve gambled and been unsuccessful unfortunately. It’s just a stroke of luck really that it played in our favour this time. But as I said we’ve had bad luck in a few races so I think it’s a balance.

I think this win gives us a boost going into the last ELMS round in Portugal. This is Filipe’s home track so he’s pushing hard and I think it always seems to come together at the last round. United is a new team for me this year and a new driver line-up but obviously we paired up quite a lot with all the testing we’ve done and pre-season but I think by the last round it probably the best you’re gonna be in any team in any situation. I think we’ve been making progress throughout the year and although we may not have shown it in our races, I think the last race at Portimão could be a good example of what we can really do on outright performance.

It’s been quite a short prototype career for me so far - 5 LMP3 races and 14 LMP2 races since 2016. My career’s not progressing as much as my driver development which has progressed exponentially since joining United Autosports and I need to say a massive thanks to them for everything they’ve done and all they’ve helped me achieve.

The results haven’t been there this year but I do think that’s down to some really bad luck and misfortune. People usually use the term bad luck for a mistake they might have made or a team’s bad performance but I think it really has been bad luck this year. At Le Mans, for example, and Watkins Glen, we had some wins nearly tied up and they fallen apart in the closing stages. It’s a shame but our main aim this year has been to get me as quick as I can be, get me up to pace and consistent, so I can start fighting against drivers at a higher level of racing. In that respect, I think my progression and my career has been extremely positive this year. I’ve certainly come a long way!

We’ve been able to reach the target that we set out at the start of this year, although we haven’t been able to achieve some of the results we thought we were capable of doing. I think we definitely achieved what we set out to in terms of my progress, especially in different aspects - my feedback, my understanding of the actual mechanical side of the car, has definitely improved significantly - again that’s down to working with great people like Filipe and our engineer Gautier. It’s a shame we didn’t get the results this year but hopefully our podium at the Red Bull Ring, this win at Spa, and another decent result at Portimão, will come together as 3 of 6 races where we’ve been able to salvage some good points and some good results.

My next goal in sportscar racing is to start winning more regularly, start doing qualifying, putting on a good show, and putting some good laps together, and to hopefully contest for more outright pace on one lap. Any driver that can produce something magical like Filipe did by almost grabbing pole at Spa can add respect to their name, so I think that will be the next step. Also gaining that little bit extra pace would also be a good next target to have and keep the momentum going and hopefully by next year we’ll be even stronger.

I’m really happy to have won my first ELMS race and first international race! Although it wasn’t the most conventional of races, as due to horrendous weather it was shorter than the intended 4 hour length, nonetheless it was a good race and the whole weekend was positive.