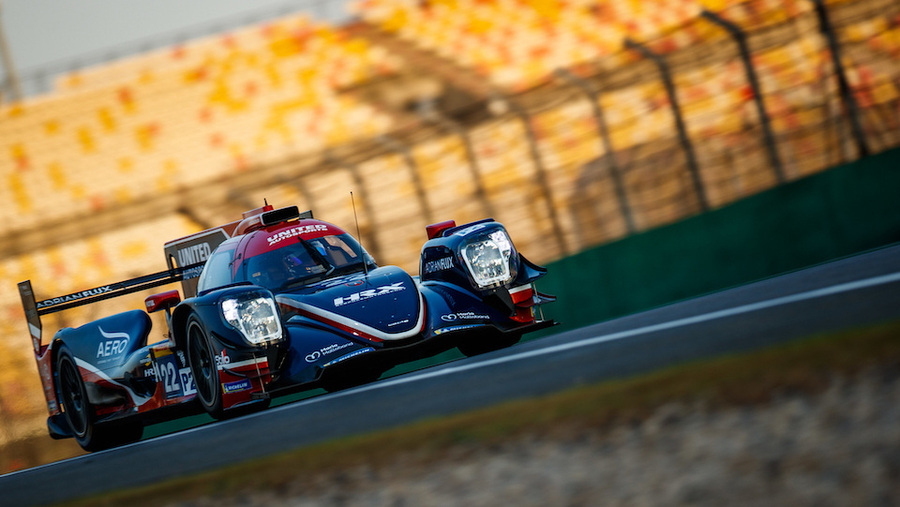 It was a shortish turnaround from getting back from Portugal before flying out to China last Tuesday. Sunday’s 4 hour race marked my second time racing at Shanghai having finished second with Paul [Di Resta] in the Asian Le Mans Series almost 12 months ago. I thought the track was really good when I saw it for the first time last November, and really enjoyed driving it. Actually, it’s probably one of my favourites and features a pretty unique first sector.

Last year’s race was a bit disappointing because we had contact at the start and then a few penalties but it was just one of those messy first round races, that you try and avoid but unfortunately we had to endure.

I arrived in Shanghai on Wednesday morning then we all went to the track together on Thursday which was an experience in itself. United has hired a 15-seater bus and I assume that the driver has passed his driving test but it’s debatable judging by the amount of times he stalled and missed gears on the 30mins journey from our hotel. Additionally, I’m pretty certain that the bus has no suspension whatsoever – it’s like a kart – as hard as a rock and some of the city’s roads are not that smooth. Sit near the rear of the bus at your peril because if you hit a bump you’ll be catapulted off the seat towards the roof!

Our #22 Oreca flew through scrutineering without an issue, we had some admin stuff and the track walk then a bit of fun organised by the WEC guys and with some other drivers work. Six teams, comprising of 12 drivers, took part in a game of jianzi, a traditional Chinese national sport in which players must keep a weighted shuttlecock in the air by using their bodies, apart from the hands . . . and Filipe and I won!

We were P3, P2 and P4 in the free practice sessions but quali was very disappointing from our side although we achieved P3. Both myself and Filipe felt we could have got a lot more out of the car and that we left a lot on track. In some respects it was good because we weren’t complaining about the car but as drivers, we didn’t perform to our highest. I’d looked at the data from FP3 and tried to take it into quali but it just didn’t work. I under drove. Neither of us were quick compared to our opposition.

But I still believed that we would be strong for the race – actually my 30th career LMP2 race – when Filipe took the start. But luck was not on our side, for the third WEC race running. Somehow some debris found its way into the engine’s roof air intake on the first lap and Filipe immediately came on the radio saying he was losing power. We thought about pitting there and then but our race engineer Gary decided to stay out and get us to lap 9 due to the way the strategy worked best in not creating an additional pit stop at the end of the race. Filipe pitted 16mins into the race but we’d lost around 35secs in the opening nine laps with the problem as Filipe losing over 20kph down the straights. We ultimately finished 21secs behind the LMP2 winner which I guess tells its own story.

I took over from Filipe and it was a shame because I got in the car already ‘nowhere’ because of the issue but my first stint was strong and we opted to change just one tyre for my second, tyre degradation was massive so I really struggled. Paul got in at the end and did a very good stint to get us back into contention but unfortunately we didn’t have the legs to recover anymore positions and we missed out on second place by less than five seconds. But overall a good weekend and I’m already really looking forward to Bahrain where surely our luck will change.

Paul got in at the end and did a very good stint to get us back into contention but unfortunately we didn’t have the legs to recover anymore positions and we missed out on second place by less than five seconds. But overall a good weekend and I’m already really looking forward to Bahrain where surely our luck will change.