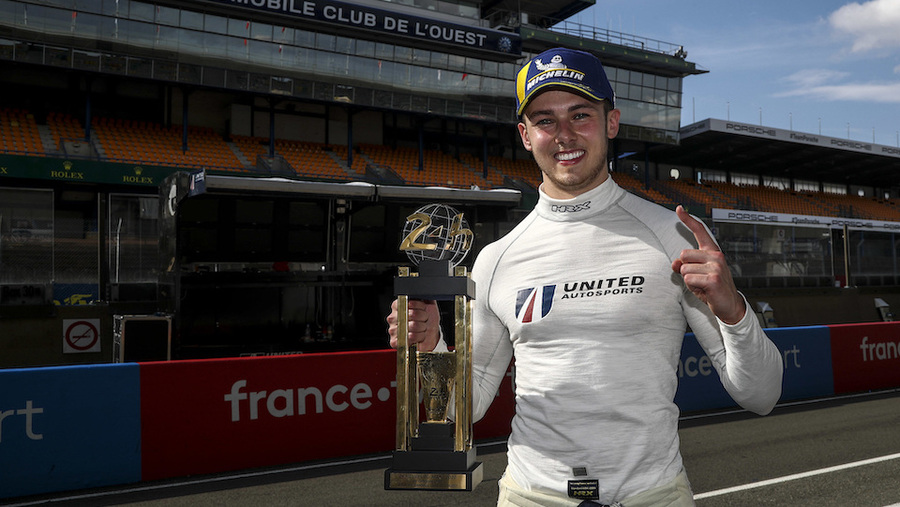 Back at home in the UK, I still can’t quite believe I won Le Mans – I’m unbelievably happy. It sounds crazy but it hasn’t totally sunk in. I started karting quite late, when I was about 14, and it was in my second year that I began to get Le Mans on my ‘radar’. But I never dreamt of ever winning it so it’s incredible that now, just six years later, I’m now actually a Le Mans 24 Hour race winner!

It was a strange race with some of the cars that we felt were our strongest competitors, suffering issues quite early on which was a big surprise. For much of the race, it was a battle for the lead with the ‘sister’ United Oreca for many hours. When they had an issue early on Sunday morning, we felt we were pretty safe with a good gap to the JOTA car. But in the final stint, I thought we had thrown it away when, in the last 30 minutes, everything began to kick off when I was in the car, with the Safety Car and Slow Zones which slashed our lead.

When it all sorted itself out, we found the JOTA car within a pit window of us. We knew we needed a splash but believed they didn’t need to stop so I got the call on the radio from our engineer Gary to push like hell – which included the in-lap and coming into the pits as you may have seen on TV. I came back out just ahead of the JOTA car but it turned out they too needed a splash of fuel, so we’d all panicked for nothing in the end. But it was good to be pushing in the final 30mins and somehow adds to the achievement of winning this great race. It feels like we fully earned our victory and was a just reward for all of the engineers and mechanics who had to work doubly hard this year with the incredibly condensed timetable.

It was definitely a team effort in what is effectively a horrible and very difficult challenge [Le Mans]. United Autosports, time and time again, show that they’re such a class act – a great team with many talented people working behind the scenes. Personally, I was happy with my performance in the car at Le Mans this year. Had good pace in my stints and was happy how I ended the race.

It's so rewarding to get it done and a great way to win the championship as well. Winning Le Mans and the WEC LMP2 title were the two goals that we set out to achieve. You can never be 100% confident that you can achieve everything as the grid is so competitive and anything can go wrong, at Le Mans especially.

After I took the chequered flag, a lot went on. We had the podium celebrations after the overall top-three had been up there. Zak came on the podium with us which was cool for him. Then we had to do interviews which were sent out ‘live’ on Facebook and YouTube to journalists present and around the world. It seemed like a long time before I was back with the team to celebrate with them. I was absolutely shattered on Sunday evening once the adrenalin, that has been charging through my body for the previous 36hrs or so, had worn off. I always believed that I could sleep, whatever the circumstances, but when your car is in a potential winning position, it’s impossible. I tried, believe me, I tried so hard, but when you're at the front, it’s impossible to switch off. I now know that!

I was also very hungry when I got back to our hotel on Sunday evening, so after having something to eat and a couple of beers, I was off to bed. It wasn’t the lavish celebration that some people think goes on. That said, now I’m back home, I’ll be hooking up with some friends later this week to celebrate in style before refocussing on our push to win the ELMS title which resumes at Monza next month!”

It feels like we fully earned our victory and was a just reward for all of the engineers and mechanics who had to work doubly hard this year with the incredibly condensed timetable. United Autosports, time and time again, show that they’re such a class act – a great team with many talented people working behind the scenes.