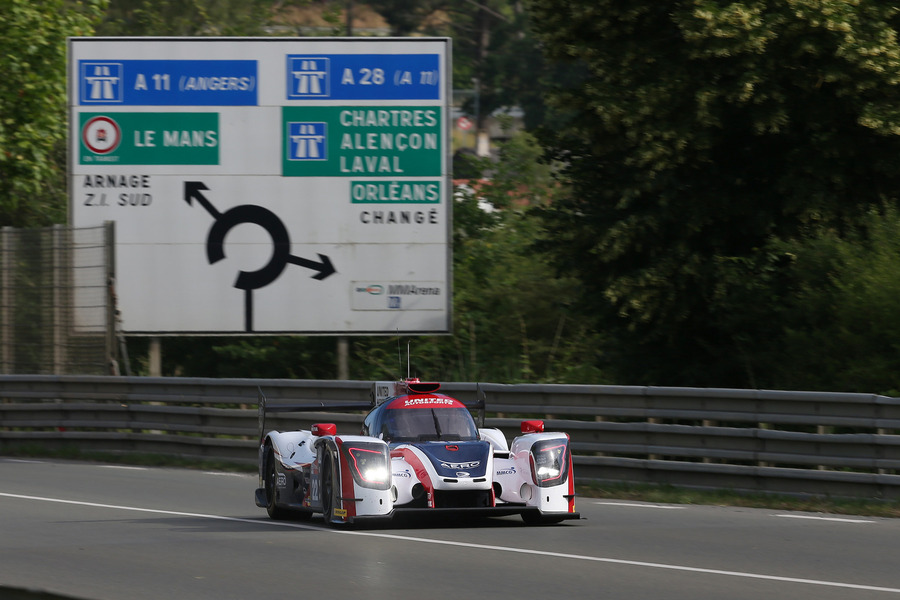 Hanson, who is racing with Leeds-based United for the first time this year, co-drives regularly with Albuquerque in the European Le Mans Series and shared the Gibson-powered Ligier with ex-Formula 1 driver and former DTM champion Di Resta in the Sebring 12 Hours (USA) three months ago. While the 10 faster, more powerful LMP1 category cars are likely to fill most of the top overall positions at the chequered flag at 3pm (local) on Sunday afternoon, the #22 Ligier of Hanson/Albuquerque/Di Resta, will be bidding for honours in the ultra-competitive 20-car LMP2 class amongst the capacity 60-car field. At the recent official test (3 Jun), the one and only opportunity drivers and teams get to practice on the 8.47-mile track, the #22 Ligier set the sixth quickest time in LMP2.

Le Mans marks Hanson’s fifth race of 2018 having contested a 24 hour race (Daytona), a 12 hour race (Sebring) plus two four-hour races (Paul Ricard & Monza) and is his only scheduled FIA World Endurance Championship event this season. The race is organized by the Automobile Club de l’Ouest (ACO) and is held on the Circuit de la Sarthe which contains a mix of closed public roads and dedicated sections of racing track, in which teams must balance the demands of speed with the cars' ability to run twice-around-the-clock while remaining free of crippling mechanical failure.

"The Le Mans 24 Hours is unquestionably my biggest and most difficult race of the year. It’s the hardest race because of the duration but also as it attracts the best drivers in the world combining to make it very tough. I first went to Le Mans in 2016 when I drove an Audi GT3 sportscar in the supporting Road To Le Mans event then made my 24 Hour race début last year. I started to be aware of Le Mans when I was karting in 2015 but until I competed in the main race last year, I had no idea just how big the event was! It’s not my all-time favourite track but it’s up there. I love the Porsche Curves while I’m not a big fan of the final chicane as I always fear for the car over the curbs. The most challenging is Indianapolis. Racing in darkness was the most difficult element of last year's race for me, my first-ever 24hr race, because without stating the obvious, you cannot see the reference points for braking and turning in [to the corner] at night so that took me time to adjust to.

“This year's LMP2 field looks like being mega competitive, top drivers and top teams – the majority very experienced at Le Mans. I start every race looking to win and I believe the Ligier will be stronger this year. United managed fourth in LMP2 last year on the team’s début which was an extraordinary result. With Filipe and Paul in ‘my’ car I’d suggest our #22 Ligier has one of the strongest driver line-ups so we’ll be in contention. What I found last year was the intensity of the build-up to the race during the week, it’s draining. With scrutineering, engineering meetings, PR activities, practice until midnight on Wednesday and Thursday evenings which are followed by debriefs, and the Drivers’ parade through the town centre on Friday evening. Then it’s time to race! All of that is actually tougher than the race itself. This time around it’s nice not to have it being foreign to me and will make it a lot more ‘comfortable’ to know the track and what to expect with regards to pacing myself through the week.

“The Parade though is something else, unbelievable, the fans are so much more enthusiastic than at any other race. Then when we’re on the grid prior to the start of the race on Saturday, the large crowd in the grandstands singing along to the various National anthems, it’s a truly amazing atmosphere. During the race. I’m lucky that I’m someone who can ‘catnap’, helped because I’m invariably tired out. This marks my third 24hr race having done Daytona in January which was good preparation while I’ve been quadruple stinting in our ELMS races this season so I feel physically well-prepared. The test at Le Mans earlier this month went really well. The Ligier is significantly more competitive [compared to last year] with its new aero kit. We started the day with a really good base set-up leaving Filipe and I to just tweak a few things. The car felt good throughout the day which gave me confidence.”