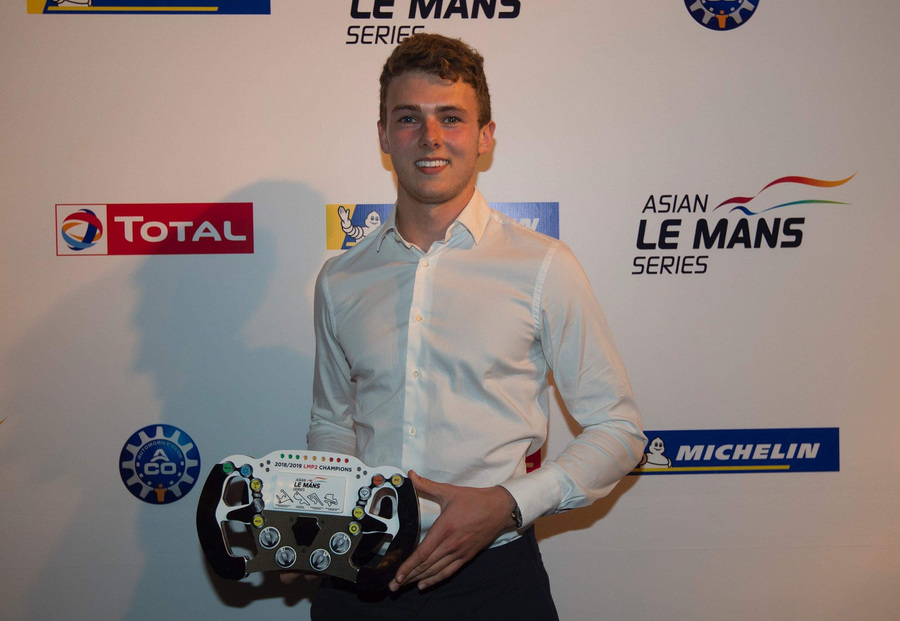 British teenager Phil Hanson is quickly making his mark in endurance sportscar racing having arrived in the category in an unconventional way. His first foray into motorsport came at the exceptionally “old” age of 15, karting for two years, before opting to go GT racing and then straight in to sports-prototype racing, in LMP3 late 2016 then LMP2 the following year. His rise has been remarkable: the youngest Asian Le Mans Series LMP3 champion (2016-17), youngest overall finisher in the history of the world-famous Le Mans 24 Hours (2017), youngest European Le Mans Series outright race winner (2018) and now the youngest ever overall Asian Le Mans Series champion (2018-19).

The Londoner, who doesn’t celebrate his 20th birthday until July, now focusses on his second full European Le Mans Season – having finished fifth in the standings last year courtesy of three podiums, including two wins – plus a full 2019-20 FIA World Endurance Championship campaign when it gets underway in September, a weekend that will see him contest a four-hour ELMS race on the Saturday (31 Aug) then a four-hour WEC race the following day (1 Sep). Hanson’s United Autosports programme will now also definitely include a third career Le Mans appearance, Phil and Paul Di Resta having earned the British team an automatic entry by claiming the outright Asian LMS title last weekend (24 Feb). Here the BRDC SuperStar reflects on the Asian LMS and looks ahead to the rest of the year . . .

What was the most important element for you of competing in the Asian LMS?
“Undoubtedly the biggest thing was clocking up over 2,000-miles between November and last weekend in the four events. There’s no substitute for actual racing and so the series allowed me to keep up my momentum of improving as a race driver.”

What was the biggest challenge you personally faced in the series?
“My fitness. Racing in such extreme temperatures that we encountered in Buriram and Sepang was very demanding. We didn’t have an issue with pace or performance.”

Highlights and lowlights?
“Apart from winning the championship and gaining a Le Mans entry for United Autosports, claiming pole-position at Fuji was personally very, very pleasing. Lowlights, or more to the point, my biggest frustration was finishing second at Shanghai, Fuji and Sepang. Our strategy was bang on in all three races but for various reasons in those races, and for reasons out of our control, we were just plain unlucky with things like driving times in the car or the arrival of a Safety Car which simply wasn’t required.”

Sepang marked your 20th LMP2 race. What in particular have you learned in this relatively short period?
“I’ve improved on everything really since that first race at Silverstone in ELMS. I can personally ‘manage’ myself better, my fitness has improved and I can give better feedback to the engineers. But a lot of that improvement is down to the team, the environment that I’m in at United – they’ve accelerated my learning unquestionably.”

You've quickly made your mark in endurance sportscar racing.
“That’s again down to the team. They’ve also put me with experienced drivers, not always sportscar guys, but ones who have a wealth of motorsport experience in general, which has helped me. Since January last year I’ve shared a car with Fernando Alonso, Lando Norris, Paul Di Resta, Alex Brundle, Bruno Senna and Filipe Albuquerque – that’s quite a who’s who!”

The remainder of 2019 sees you in ELMS, at LM24 & beginning your first full WEC campaign.
“I believe ELMS will be extremely competitive with a massive LMP2 grid this year – perhaps even stronger than WEC in terms of car numbers but racing in WEC will nevertheless be a step up – it’s competing on a world ‘stage’.”

The ELMS/WEC double-header weekend will obviously be exhausting.
“It’ll be a very hard weekend – physically the toughest weekend I’ll ever do. Silverstone is notoriously a tough and demanding track. While it’ll just be Filipe and I in the four-hour ELMS race on the Saturday, they’ll be three of us sharing the Ligier in Sunday’s four-hour WEC race. Le Mans and Silverstone will be the two peaks of the season.”

What is your ultimate goal?
“I want to be consistently winning races in the future and to have won championships, ELMS or WEC for example. I’m 20 later this year, and within the next five years, I want to have won my class at Le Mans. I want to be driving the top class sportscars, whatever they may be in the future, and racing into my 30s.”

“I want to be consistently winning races in the future and to have won championships, ELMS or WEC for example. I’m 20 later this year, and within the next five years, I want to have won my class at Le Mans. I want to be driving the top class sportscars, whatever they may be in the future, and racing into my 30s.”